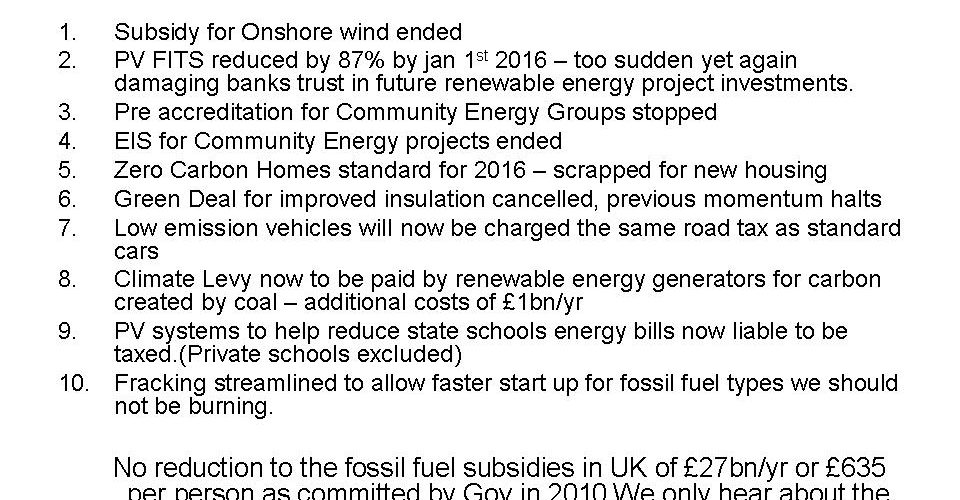 Over the course of an hour’s discussion we raised our concerns about recent government activity on energy and local community related issues.

Kate Gathercole introduced Bill to the work of the Herefordshire Green Network, and then invited Bill to comment on a number of problems specific to our rural county. Discussions included transport, and the need for both policy and infrastructure to support local bus services, plus concerns about the loss of environmental protection with our exit from the EU. Bill suggested that the exit process and changes in laws would be slow to implement, but agreed that he should particularly look for policies that will be of relevance to rural communities in Herefordshire as these go through parliament.

Gordon Coppock then drew Bill’s attention to the failure of the Green Deal and the changes in uptake of retrofit options with the loss of ECO funding under the Conservative and Coalition governments. The office of statistics shows that housing in North Herefordshire is in the top 20 worst constituencies in the country for energy inefficient home stock. Bill suggested that ‘inefficiency’ figures in Herefordshire are high simply because so many local homes are off gas grid. However Gordon’s graph from the office of National Statistics clearly showed the curtailment of momentum in 2010 when the coalition government introduced the Green Deal process. The Government have since re-introduced ECO based insulation and energy saving project support (April 2017) but this is now energy provider specific, with capped funding that is complicated to obtain and only available to those on benefits rather than the wider community – who still need encouragement to adopt these measures.

Discussions went on to explore our dependence on future nuclear energy solutions – considering the costs, the uncertain carbon footprint (more than the 50g CO2e/kwh as recommended by the CCC), and the long build time. Bill suggested that these costs might be similar to concrete costs for tidal lagoons, but Gordon corrected his figures on the successful Swansea Bay Barrier, which all agreed was a good development. Bill then expressed his unhappiness with the aesthetics of wind power. But conceded that he would be happy to be challenged on this if we felt that the public mood on wind power has changed. Figures indicate that 73% of the UK population would now support onshore wind (see ‘Waves 8 – 13’ of DECC’s ‘Public Attitude Tracker’ surveys via the links below).

Gordon and Gareth Williams went on to demonstrate that the Conservative government have effectively reduced support for energy efficiency measures across a number of other areas, including renewable energy, energy regulation and community energy. The Governments own surveys indicate strong support for renewable energies (see the latest BEIS reports below), and strong support for community owned renewable projects. However their policies have included erratic and unplanned changes to FITS, removal of EIS and taxation of PV systems on schools – making further progress for community projects near to impossible. Bill commented that this looked like death from a thousand cuts. We commented that his own voting record had supported many of those cuts. When challenged in this way on his voting record Bill acknowledged that there are times when it is necessary to “tow the party line” wherever your own personal interest lies. He also commented that policies brought as part of the Budget will automatically get voted through by the party.

Towards the end of our conversations Bill commented that we should talk to his colleague Jesse Norman. He also expressed regret that the government seemed to be “missing some joined up sensible steps” with regard to their overall energy policy.

Catherine Jennings thanked Bill for his honesty in this meeting and he agreed to meet with us regularly in the future if he keeps his seat in North Herefordshire.

If other members of Herefordshire Green Network would like to put forward thoughts for representation at future meetings with our MPs, please let us know.