Next year’s Seed Swap has been confirmed for:

THIS IS A FREE EVENT

Come along and swap seeds, plants and tips. Even if you have nothing to swap, you can still join in and take home some seeds or plants. Newbies are always very welcome at this friendly event, and we look forward to seeing familiar faces.

For the first time there will be seed potatoes for sale – 18 varieties available, at a modest 15p per tuber. Great opportunity to buy all your Seed Potatoes!

·       Tools for Self Reliance charity – they collect old tools (so bring yours along), and also sell a wide range of their refurbished tools;

Free Talk at 11.30 by Kevin Alviti on Unusual Vegetables.

Kev is a knowledgeable and highly entertaining speaker. He is a seasoned, multi-skilled homesteader and blogger.

In Our Hands – Land & Food Links 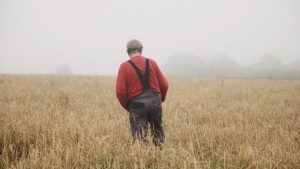 Thanks to all who came to the Courtyard last night for the showing of In Our Hands. It was great to see many new faces and to carry the conversation on afterwards… and let’s keep that conversation going!

Please get in touch if you are part of any organisation producing food, locally and on a small scale. Let’s share what we’re doing… there was talk of a shared mill last night, perhaps this is already happening?

Herefordshire Food Links is an online directory for local businesses, food producers, retailers etc. Add yourselves to the Directory online at the “Join” section of the site at this link.

Please share In Our Hands – the film. It’s now available to buy (including digitally) – what an ace Christmas Gift!  This is an exceptionally important time to be listening to, and speaking up for, small scale ecological producers and the film is both a joy to watch and inspiring.

More information on the movement to fix our food systems:

Landworkers Alliance – a network of small and medium farmers in the UK, linked to the huge Via Campesina global movement

This Land is Ours: A Landrights Campaign for Britain

Next month:  our gathering will be all about building our capacity for campaigns like this – Raising Funds, and Publicising what we do. If you’ve ever thought ‘I wish more people knew what we do’ this is for YOU! More here.

And all these links – plus your OWN if you are a small producer! will be found very soon in our new resources area. Watch this space!

Ragman’s Lane Farm has an opportunity for someone to run their own Market Gardening business on 1.7 acres of organic land in the centre of the farm, taking over from a very successful business built up over the last 5 years.  The current tenant is leaving in the autumn to make way for a new grower and a new season.

Ragman’s is a dynamic farm in the Forest of Dean, Gloucestershire; they have been working with organic principles and permaculture for more than 25 years and supporting people to access land to establish their own business.

You will need experience, skills and the ability to deliver a self-sustaining project. 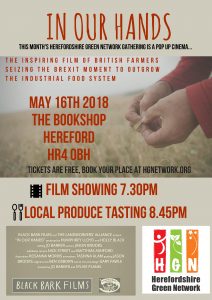 Our next Network Gathering will be a pop-up cinema!

Alice, HGN member has been wanting to show this film in Herefordshire for a while and we are finally showing it – thanks to A Rule of Tum for hosting at their Bookshop Restaurant.

In Our Hands is the story of what small farmers are doing for the future of our food system post-Brexit.  There is a growing movement of farmers and food workers who are creating vibrant farms, living soils, thriving food markets and a fairer food system for all.

Alice says: ” This is what we need in Herefordshire, to return to a more local, sustainable food system, that provides local farmers and growers with a decent wage. This film is what our future is all about – how we produce food.”  Alice grew up on a small holding near Ledbury and was inspired to get into commercial growing after an apprenticeship with the Soil Association Future Growers scheme. She now works at Arkstone Mill organic veg box scheme, who will be one of the local producers showcasing their wares on the night. She would like to find ways for more young people to stay farming locally: “It’s very difficult for younger people who’ve grown up with farming to stay in it, if there is no family farm to inherit. It’s hard to see how we can find our own farms and land.”

Herefordshire Green Network is proud to be promoting this film, and looking forward to bringing local farmers together alongside the people that eat their food every day.  Despite recent changes, this county still has a high percentage of small to medium size farms, plus many people who would like to be farming on a smaller scale.

We hope this film will feed into conversations about food production for farmers and small-holders alike.  Please spread the word on Facebook Instagram and Twitter – thanks!

Tickets are completely free for the film, book a place at this link

This is being shown as part of two HGN events celebrating land and farming in May: the other is Three Acres and A Cow, a show touring the country connecting the Norman Conquest with fracking, Brexit and everything in between.  It’s been getting rave reviews and we’re proud to have it here in Herefordshire at Canon Frome Court on 13th May.

Come to a right romp through history next weekend!

‘Three Acres And A Cow’ connects the Norman Conquest with current issues like fracking and Brexit via the English Civil War, Industrial Revolution and plenty more besides – through songs, stories and poems.

“Totally knocked sideways by this show – for goodness sake, go see it while you can!” Lydia – more reviews here

The family-friendly, afternoon will have tea, cake, and a bar available and there will be a farm tour afterwards. The setting is the picturesque community of Canon Frome Court.  Get your ticket here

Hosted by Herefordshire Green Network to run alongside our HGN Gathering on the 19th May: In Our Hands

Food Rescue – what next..

Along with the Herefordshire Food Poverty Alliance we are starting an exciting conversation about developing some funded local projects. Many of you had projects that you were beginning to set up or talked about that evening: a local community fridge, a local food hub, food social clubs, school holiday food clubs, local gleaning projects and also of course a local Food Rescue inspired by the work of Worcester Food Rescue.

If you have bright ideas and local connections or would just like to be part of taking these conversions further please could you get in touch asap (email kate@hgnetwork.org), so that we can make sure that your project idea is firmly in the pot as funding bids are developed.

Millions of farmers and workers are still being unfairly treated despite working hard to provide the products we love. Unfairness in global trade is rooted in centuries of exploitation. Producers are fighting for a fair deal, supported by Fair-trade, earning their way out of poverty and transforming their communities.

For those of you in the north of the county, you might want to join in with Ludlow’s celebrations of Fairtrade Fortnight:

This year Ludlow Fair Trade Town Group is celebrating 15 years since being awarded Fairtrade status at the end of 2002. We’ll have events and activities throughout the year as well as in Fairtrade Fortnight.

Events and Activities in Ludlow:

Look out for Fairtrade displays in shops and cafes in Ludlow and choose Fairtrade products they supply.

Throughout the fortnight and beyond, St Laurence’s Church will host a Traidcraft stall of food and crafts

And Ludlow Fair Trade Town Group will be supplying a Fairtrade football to a number of schools to help promote Fairtrade in schools.

Banish the Winter Blues at Hereford’s First Fabulous Polish Dining Experience – a fundraising event for Hereford River Carnival organised by their brilliant friends at Old Granary Pierogi and Left Bank Village.  It promises to be a great night so tell all your friends!

Places are strictly limited to 50 so spread the word and encourage people to sign up fast.

HGN are currently planning an h.Energy Village as usual for this year’s Hereford River Carnival on Saturday 5th May. We are also devising some fun awareness raising activities around single-use plastic and local food issues. Hereford River Carnival have been great friends to us over the years supporting the h.Energy message – this is a fun way to give back to their fundraising efforts for this fabulous community event.

Professor Nic Lampkin, from the Organic Research Centre, said, “The Dean Organic Fund is a rare opportunity for small-scale organic and similar operations to access interest-free loans. Jennie Bone was passionate about conserving wildlife in the farmed environment and she widely encouraged and promoted the environmental benefits of organic farming and growing. We are delighted to continue Jennie’s fantastic legacy and will look forward to receiving applications from eligible businesses.”

The Organic Research Centre is inviting applications for interest-free, unsecured loans from organic farmers and food producers who wish to expand their enterprises by investing in equipment or stock or would benefit from other working capital. The fund is also open to those producers that are not certified organic but whose operations are closely aligned with organic principles. The loans are repayable over periods of up to five years and applications are welcome from companies, sole traders, community or social enterprises and charity-owned businesses.

One of the outcomes of our HGN Food Rescue discussions on Wednesday last week at the HGN Gathering was an interest in Gleaning.

There is a national Gleaning Network – supported by the organisation Global Feed Back. For more information or to join, click here: https://feedbackglobal.org/campaigns/gleaning-network/

… and keep HGN in touch if you have any ideas for starting Gleaning Days in Herefordshire. We can plan ahead for autumn pickings pretty nicely from here, and I’m sure lots of us would want to join you…

As everything goes into stasis around Coronavirus, we need more than ever to be moving forwards with our work as a community around the climate crisis.

...together for a sustainable Herefordshire.

A reminder that, in collaboration with HGN, The Co

How can we tackle climate change, boost UK manufac

Blog is out! Read what is happening in our county

Get involved in the Ludlow 21 Green Festival happe

So much happening this week! From the unveiling of

Wye Ruin It? Have put together their own list of C

"Nothing is so beautiful as Spring – When weeds

Spring Greens Fair will be held on the 4th and 5th

Make the right choice on the 2nd of May - get Coun

'Loveliest of trees, the cherry now Is hung with b

Get the 'Zero Carbon' Elevator Pitch! Following He

"A Light exists in Spring Not present on the Year

"I am amazed at this spring, this conflagration O

"Dazzle me, little sun-of-the-grass! And spin me,

"Can I believe there is a heavenlier world than th

Our daily bulletin is sent every day at 5pm with any new posts that day. No news = no email!

Our weekly roundup is sent every Friday at 5pm with a summary of all the posts that week.