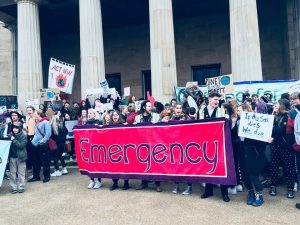 Hundreds of people came together in front of Herefordshire Town Hall to show our councillors how much the planet’s future means to us and our children. We were soon joined by a large group of students from both the sixth form and Art College, carrying home made placards and chanting in one voice in a huge call to action. The mood was happy and united but not overly hopeful that we would get the declaration we all sought.

However, I am delighted to be able to tell you that Herefordshire Council have indeed declared a climate emergency! This is fantastic news! But our work is not yet done. Councillors went on to tell the Hereford Times that this would not stop them from building the bypass that they have been working on for over 10 years (and we thought they were consulting the public on this!). Let’s celebrate a little bit but onwards we must go! There is much to be done.

If anybody would like to hear the beautiful song by Blythe Pepino called “Emergency” that was sung today, here is a link!