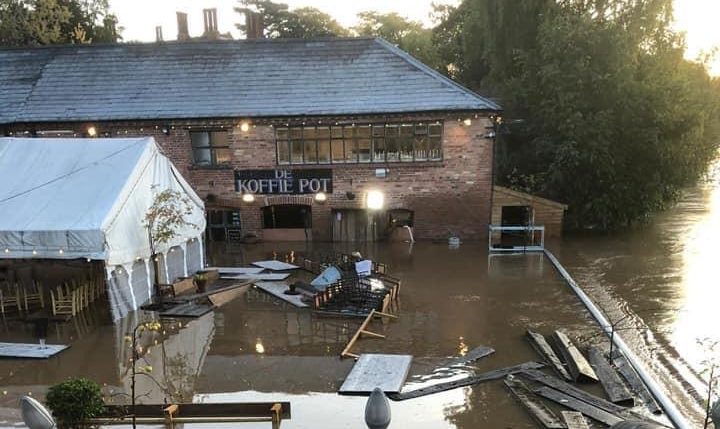 De Koffie Pot is rapidly being “sorted” after the flooding over last Saturday night but will not be back in action for a few days. The ground floor of the Left Bank has been set up as a most salubrious “Coffee House” – a very pleasant place to have a coffee and cake with fine views of the river from inside or out on the terrace, worth a visit! Our discussion evenings will also continue to be held in the Left Bank.

Wednesday 6 November 2019
Voices of Latin America
Voices of Latin America, Social Movements and the New Activism is the title of a new book by the Latin American bureau. The book will be introduced by contributor Mike Gatehouse, whose involvement with Latin America goes back to his time in Chile during the Popular Unity government of Salvadore Allende. There will also be readings from the many interviews in the book. The second half of the event will be led by Cecibel Egan who is part of the Pachamama (Mother Earth) project which gathered prayers and funding to take to Bolivia a year ago. The money raised went to women’s projects there. The prayers were deposited on the skirts of the mighty Akamani mountain where they also did a ritual. Cecibel will describe the project and lead us in a ritual.
Organised by: Talk Shop – Perry Walker.

Last Wednesday, 24 October, we held a very interesting and valuable evening hearing about and discussing the recent XR rebellion in London. Numerous incidents and amusing anecdotes were related and discussed; comparison was made with the April demonstrations and a need to reflect and learn from recent experiences clearly expressed.

It’s difficult to sum up but here are a few of the points made:

*Wikipedia entry: Extinction Rebellion (abbreviated as XR) is a global environmental movement with the stated aim of using nonviolent civil disobedience to compel government action to avoid tipping points in the climate system, biodiversity loss, and the risk of social and ecological collapse.
1. Government must tell the truth by declaring a climate and ecological emergency, working with other institutions to communicate the urgency for change.
2. Government must act now to halt biodiversity loss and reduce greenhouse gas emissions to net-zero by 2025.
3. Government must create, and be led by the decisions of, a citizens’ assembly on climate and ecological justice.