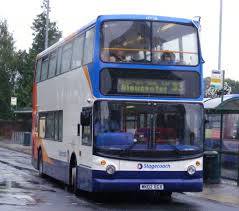 The results of the consultation and the stalwart efforts of Rail & Bus for Herefordshire (RBfH) volunteers handing out leaflets on the proposed cuts to bus services took the Council by surprise. The response to the consultation was one of the biggest they had which served to emphasise the importance of buses in both the social and economic well being of this rural county. The result was a postponement of the cuts proposed for 2017. However, the sting is in the tail as it is still on record that the council will seek to progressively reduce the bus support budget to nil over three years.

What is equally as disturbing is that operators are beginning to prune their commercial services, albeit on a small scale at the moment. This is indicative of the dire straights that some operators are finding themselves in without support, and not necessarily financial support from the local authority.

The RBfH Buses Sub-group will continue its dialogue with and lobby Cabinet members of the council. They want to stress three points:

1. That the Council needs to be more upbeat and promote existing services as a value for money contribution to our economy and social life…the constant gloom about buses is damaging every day services

2. That the definition of secondary core services in the future needs to re-instate those which serve large settlements (see below)

3. That it needs to accept that Community Transport cannot make up for the loss of mainstream routes in some areas.

An interesting point, however, that Herefordshire council have gone out to tender on eight contracts due for renewal in September 2017. The contracts involved are those for the main Hereford-Kington service and services in eastern Herefordshire operated by Astons coaches and DRMBus. Further, the contracts for eastern Herefordshire are issued individually but also as a combined contract with the title of Ledbury Area Services. One presumes that the council are hoping such an area approach where contracts can be linked using the same bus will lead to discounted prices from operators. The results are still awaited so we will have to wait and see.

In the meantime RBfH urge you to write to the Portfolio Holder for Transport, Councillor Durkin at bdurkin@herefordshire.gov.uk, together with your local councillors to seek assurance that the network of routes to our main rural settlements are maintained in the future.